A great turnout for this year’s tournament and 65th Anniversary party. 28 adults and 18 Junior’s took part in the Open, Junior, Handicap & Doubles events; held over three evenings. On Sunday 29th May With 60 past and present members, friends and family attending, the club celebrated its 65th Anniversary with a Doubles event and a party. It was a fantastic success, many thanks go to all the participants and organisers!

At the party the President, Mike Kercher who has himself been associated with the club for almost all of this time introduced Derek Wedge who is the last surviving member of those who founded the club. Derek only gave up playing a couple of years ago, but is still active in the administration of the Rosehill Community Association of which the table tennis club is part. On display was some of the memorabilia the club has collected over the years, including trophies and gifts from our association with Sutton’s twin towns. The highlight of the evening was a commemorative birthday cake decorated with the Rosehill crest.

Derek Wedge our founding member and Barbara cut the cake 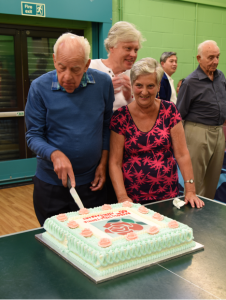 Junior and Adult session – no vacancies

Due to the high demand we are full on all nights and have a long waiting list. Please contact Steve via the contact us if you wish to be added to our waiting list.

Junior and Adult Sessions – Members only

Due to the high demand we are open for members only.